Money Mindset – 3 Steps To Shift From Poor To Rich Mindset

It seems the more I learn, the more I realize that if we want to achieve or improve at anything in life, including our financial life, it starts with a mindset shift.

Most docs and other high-income earners that join our Passive Investors Circle tell me that it took a mindset shift to get rid of limiting beliefs, actually a money mindset shift, to motivate them to start focusing on passive income creation.

Recently, I was reminded just how important our mindset is when pertaining to our money beliefs after watching an interview between Robert Kiyosaki (author of Rich Dad Poor Dad and The Cashflow Quadrant) and Garrett Gunderson (author of Killing Sacred Cows).

If you have time to watch the interview, you won’t be sorry: 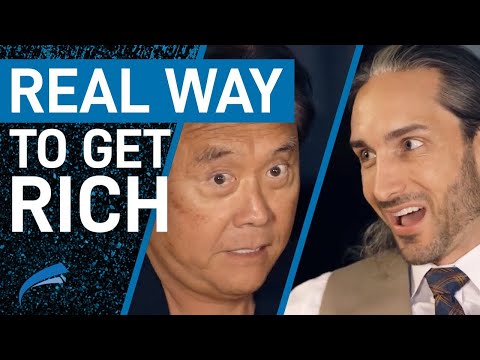 In 1996, my senior year in college, I first read the book, The Millionaire Next Door.

If you’ve read both books then you know that they’re polar opposites of one another.

The Millionaire Next Door, similar to Chris Hogan’s Everyday Millionaires, surveyed thousands of millionaires regarding their success habits.

If I had to use “one word” to sum up the habit the majority of millionaires have it would be “Frugal“.

Whether you realize it or not, there’s a difference between being frugal vs cheap.

When someone is living frugally, this means that they’re intentional with their money. Because they want to have more, they look to get the most value from the dollars spent.

For instance, if they had to choose between a gas station selling gas for $1.79/gallon vs one at $2.27 a gallon, the choice is clear, the lower price wins every time.

The short answer is “no.” Frugal people want to save money but also value others where cheap people don’t.

I personally know someone that berates others when it comes to money. He’s the definition of “cheap.”

Not that long ago I walked into our local pizza restaurant where he was seen belittling the person behind the counter because they wouldn’t accept his expired coupon.

Cheap people think that EVERYTHING is overpriced.

The bottom line is that cheap people don’t like to spend money, constantly complain about how much stuff costs, lack honesty and moral principles.

What Is A Money Mindset?

A money mindset is your beliefs about how money works in the world. Basically, it’s your attitude about your money situation.

Your money mindset guides you on a daily basis about:

This mindset drives how you make key financial decisions each day which can impact your ability to achieve your goals.

Most successful people will tell you:

“If you change your mindset about money, you’ll tend to make better choices about how to overcome challenges.”

Here’s a perfect example of how having a negative experience with negative feelings growing up can affect your money mindset.

Let’s say you grew up in a household that constantly fought about money and your parents always said things like:

As a result, this constant bickering might cause you to subconsciously associate money with anger and conflict.

There’s a good chance that in this household, these same parents may have taught that people with money are evil, materialistic, greedy and selfish people.

Do you see how growing up like this could affect your money mindset and cause you to have a terrible relationship with money?

The example above is one of the main reasons millions of people are walking around with a scarcity mentality about money that prevents them from getting massive amounts of it.

People with this type of mindset believe that there will NEVER be enough to go around.
They try to cling to everything they have for fear of coming up short. Their thoughts and actions arise from a place of lack.
When resources (money, opportunity, recognition) are perceived to be limited then that allows fear and paranoia to take over.

When you have this type of mentality, all decision-making is based on the false notion that there isn’t anything else coming your way.

Or that there’s no more money out there to be made other than what they make each month.

Do me a favor. Take out your wallet and pull out some cash and place it in front of you.

Now ask that money this question:

“Hey money, yeah you sitting there on the table. Do you care about how much money I make? What? You don’t know anything about me? Well I’ll be…”

Look, money doesn’t care or know anything about you or me. It flows to where it wants to go….mainly to who wants it bad enough and has an abundant mindset.

2 Corinthians 9:8 “And God is able to bless you abundantly, so that in all things at all times, having all that you need, you will abound in every good work.”

Real estate guru Grant Cardone constantly talks about how having an abundant mindset can change your life…in a good way.

His definition of abundance is a very large quantity of something. It means having plenty of the good things of life.

“Overflowing” is his word he likes to use to describe abundance.

He says that the WORSE thing we can do with money is have it in a stagnant place such as a savings/checking account or under your mattress!

Here’s what Stephen Covey the author of The 7 Habits of Highly Effective People says about the abundance mindset:

“The Abundance Mentality flows out of a deep inner sense of personal worth and security. It is the paradigm that there is plenty out there and enough to spare for everybody. It results in sharing of prestige, of recognition, of profits, of decision making. It opens possibilities, options, alternatives, and creativity.“

Those with an abundance mentality are able to focus on the long-term and realize that just because you don’t have something NOW doesn’t mean you can’t get it later.

(Just because you aren’t a millionaire NOW doesn’t mean you won’t become one later.)

3 Steps To Change Your Money Mindset

1) Forget about the past….let it go

As we discussed earlier, your money mindset more than likely started during childhood.

If you were around parents or relatives that constantly discussed having a “lack” of money, then you more than likely have a negative view of money.

The first step to change your money mindset is taken from a line from one of my all-time favorite movies First Blood.

For those of you that aren’t quite the violent type, you may resonate better with a popular Disney tune that also teaches you to “Let it go…”

Either way, letting go of the past is key. These negative statements has helped create a negative belief system about money.

I believe that we’re all born rich. This doesn’t mean we all come from wealthy families, but we all have what it takes in us to make a lot of money.

So no matter where you come from, your past doesn’t define your future.

2) Stop comparing yourself to others

Dave Ramsey many times tells his listeners to stop trying to keep up with the Jones’s because they’re broke too!

Studies show that 78% of Americans are living paycheck to paycheck as they don’t have an emergency fund.

Basically, that means almost 8 out of 10 people probably can’t afford their home and car they’re driving.

And don’t get me started on social media. It’s way too easy to get sucked into comparing yourself with others as they flaunt pictures of  exotic vacations or new car purchase.

You don’t know the details of the other person’s finances. Yes, they could be enjoying the high-life but it could be fueled with mounds of credit card debt. Thanks, but no thanks. Not all that glitters is gold.

Whenever you find yourself making comparisons to others and notice that you’re lacking, you’re diverting attention away from focusing on your own finances and goals.

3) Become a sponge for knowledge

Proverbs 13:20 states, “Whoever walks with the wise becomes wise, but the companion of fools will suffer harm.”

Another way to look at this is, “If you want to soar with the eagles, you can’t run with the turkeys.”

I don’t think we can get anymore straight-forward advice than that.

If you’re going to be wise, you’ve got to have wise people in your life.

You need people who build you up, not tear you down—those who are wise, not fools.

The people you spend the most time with are going to have an impact on who you become and what you value, so be wise about who you choose to spend your time with.

Once you take the above three steps then you’re ready to take action. After step #3, you’ll realize that your old way of thinking about how money works was probably wrong.
I know mine was.
After recently speaking at a dental conference in Florida about building wealth with passive real estate, a dentist approached me with a look of excitement on his face.
He said, “Dr.Jeff, you have no idea how much you’ve opened my mind to other ways to reach my financial goals. Thank you!”
This doc (and others in the room) were still under the impression that the only way to wealth was to work until they had reached their “magic number” and hope that they didn’t outlive their savings.

Now that they know there’s more than one way to skin a cat, it’s started to change their money mindset and make their future much brighter than before.

Are you ready to take the next step to transform your money mindset to prepare for your financial future?

Join the Passive Investors Circle to begin to change your financial situation for good.

Are you an accredited investor that’s interested in learning more about passively investing in real estate?
Click HERE for more information