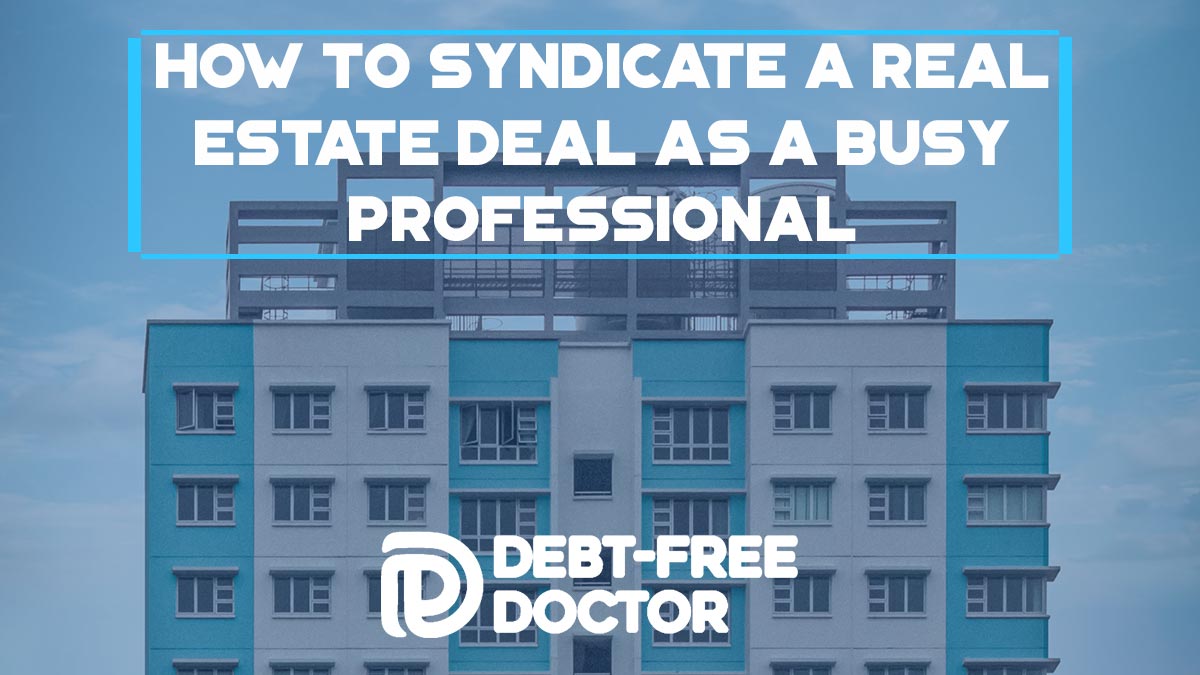 A new Passive Investors Circle member recently asked, “Jeff, how can I purchase an apartment building and bring in others to invest?”

After asking him a few questions about his background, I learned:

He also informed me that he had $3 million in a 401k (stock market) and was a part owner in two medical office buildings.

He thought that in order to invest in real estate, you had to be actively involved.

When I first started, I also thought that there was only one way to go: Save up money until I had enough to do a deal on my own or bring in outside investors with me.

Luckily I learned about real estate syndication deals at a meeting in Dallas, TX.

My eyes were opened to the possibilities to grow our passive cash flow while sticking to what I knew best, treating patients.

Regarding real estate syndications, there’s two main ways you can become involved: as an active or passive investor

At the time I first began real estate investing, I chose the passive role. It’s important to write down your goals for an exit strategy as they will help guide you through the many choices that come up.

For instance, we wanted to spend more time with our boys and I didn’t want to work extra hours or weekends (who does?).

For these reasons, I chose NOT to be a landlord and go the passive route.

But I do talk with quite a few doctors that want to get actively involved in the syndication process.

Whether you want to invest passively or actively, I feel that it’s a good idea to learn the process of what goes into syndicating a deal so you’ll be better informed if you decide to invest. A syndication deal is a great way multiple group of investors are able to pool funds together to purchase a property that is more expensive than any of them could have afforded on their own (i.e. apartment building).

Syndications are governed by the Securities and Exchange Commission (SEC) and must file documentation (i.e. private placement memorandum) with and report to them.

Originally these investment properties were exclusive to the very wealthy but now are much more accessible to the accredited investor.

The number of investors can range from a handful to a few hundred.

There are two types of partners in these deals:

The deal sponsor finance deals with two forms of capital:

If you decide to become a real estate syndicate yourself, you’ll need to know that banks will not provide 100% of the money to finance, (debt) so you’ll have to find outside investors to make up the difference (equity participation). There are different types of real estate syndications that focus on:

Most of the syndications I personally invest in and recommend to members of the Passive Investors Circle are value-add multifamily deals.

An example of this would be investing in an apartment complex whose units haven’t been updated in 12-15 years. These kitchens are outdated, counter tops are old, carpets are worn and new landscaping needs to be put in.

By making improvements, we can increase the rents, which increases the income of the property and thus, the overall value.

How A Syndication Deal Is Structured

The majority of syndication deals follow a similar structure but there are some differences. Here’s the basic structure:

#1 Sponsor identifies an asset and places under a contract.

#5 GP begins the process of raising outside capital from investors via soft reserves.

#6 The property closes and GP begins either managing themselves or outsourcing.

#7 Cash flow is distributed to the limited partners (passive investor) based upon the agreement.

#8 Exit strategy is carried out. Typically this involves selling the property after the original hold period is completed. Limited partners receive a split of the profit based upon the initial agreement (ex. 70/30, 80/20 split).

What Kind Of Profit Is Available In Syndications? Profit in real estate, regardless of a syndication or not, come from:

When the property’s operating costs are less than the total rental income collected then a profit is generated.

This is called the net operating income (NOI) and is the cash flow distributed to the limited partners via distributions.

After a property is sold in a syndication, this generates another form of profit.

Whether you syndicate a deal yourself or not, know that developers typically purchase an asset that they feel can be improved and sold for more than the purchase price plus improvement costs.

How To Get Paid In Syndications

Depending on the role you play (GP or LP), there are various ways the parties involved get paid.

Let’s first discuss if you decide to become the deal’s sponsor.

If you plan on becoming the project’s sponsor, expect a tremendous amount of responsibility to be placed on you.

But for this work you’ll be able to be compensated for tasks such as:

Also, as an incentive for performing to the deal’s projections, sponsors also receive a share of the profit once it sells.

Finding a multifamily investment deal to syndicate is much tougher than it sounds. Our group typically will underwrite (evaluate) 250 deals a year to acquire 4-6.

We’re constantly looking for the “needle in the haystack” deal.

Typically the sponsor charges a one-time fee on the purchase of a property. These acquisition fees usually range from 1-3% of the purchase price.

This fee represents the work it took to acquire the deal and put it together. It’s earned at the close of escrow on the acquisition.

They also have other costs involved in finding deals such as:

This fee compensates the sponsor for their management of the property during the course of the investment.

Typically they charge 1-2% based on the gross revenue collected from the property and its usually paid quarterly.

Remember that investors in syndications earn income from the property’s appreciation and rental income.

Once the hold period is up (5-7 year average), the GP then sells the property. This is when the appreciation portion of the income is realized.

The work for managing the sale process includes:

Typically the sponsor is compensated 1-2% of the sales price in the form of a disposition fee.

Whether you’re a passive investor or a syndicator in a deal, you can expect to be compensated when the property is sold.

In a typical syndication structure, the limited partners are paid a preferred return from the available cash flow. This is the equivalent of interest on their invested capital plus the majority of any profits.

Any profits remaining is paid to the sponsor and called the promote.

The purpose of the promote is motivation and incentive for the sponsor to do their best to ensure success with their project.

Most deals have a 80/20 profit split. The 20% is the promote paid to the sponsor group. Even though passive investors don’t take on the responsibilities involved in a syndication, they are still compensated for the risk they take providing the equity in a project in two ways:

As previously discussed, a preferred return refers to the ordering in which profits from a real estate project are distributed to the passive investors/limited partners prior to the general partners receiving payment.

The pref is a percentage of the total amount LP’s have invested and is paid from either:

For example, if the preferred return is 6% and a passive investor has $100,000 in the project, they’ll receive $6,000 per year until they receive their initial investment back in full.

The amount of profit share a limited partner receives after a deal sells is paid in proportion to how much they originally put into the deal.

Example: If you’ve planned to invest $100,000 in a deal this year with a 7% pref, you could potentially make $7,000 each year, as long as the property is generating enough income.

Once all investors receive their preferred return, the remainder is divided between the GP and LPs.

This is based on the originally set profit structure. Most are either an 80/20 or 70/30 split.

I can’t tell you how many full time practicing doctors I’ve spoken with over the past 12 months that have zero real estate investing experiencing yet they want to jump in and put deals together.

The SEC and IRS are two agencies you don’t want to mess around with.

Before completing training, doctors receive the proper education in order to treat patients. This is no different than becoming a syndicator. You must research and educate yourself before jumping in the game.

Make sure you have a qualified attorney on your team that can help you set up your syndication business and guide you through each deal. Their job is to inform you of the paperwork and disclosures required for each syndication.

One of the most important steps in syndicating real estate yourself is finding others to invest in deals with you.

They can be found in both your personal and professional life. These people could be those you do business with, attend church with or other functions.

Other potential areas are:

The MOST important step when investing in syndications is finding the right sponsor with a solid track record to work with. If you plan on syndicating deals then you MUST bring your A game.

It’s up to you to find suitable markets to invest in where properties you make available to investors will generate solid returns.

Most sponsors stick to one or two asset classes and focus their efforts in finding the best deals within them such as multifamily apartment buildings.

As a syndicator, these multifamily assets would need to fit your investment strategy (i.e. value add) in order to generate a return for your limited partners.

After you’ve raised funds and closed the deal, it’s time to settle in and figure out if you plan on overseeing the daily operations or not.

Depending on your goals, you may want to be more hands-off and hire a property manager. If you do plan on managing, then you would be able to charge a fee for those services.

As the sponsor, one of your jobs is paying out distributions (typically quarterly during the hold period) as well as any additional monies once the property is sold.

Also, it will be your responsibility for the accounting and finances of the deals, and individual properties.

This is where you can get your real estate CPA involved for assistance.

Whether you plan on syndicating a deal yourself or not, it’s a good idea to know the process involved.

You’d be amazed at the opportunities that open up once you begin syndicating your own deals.