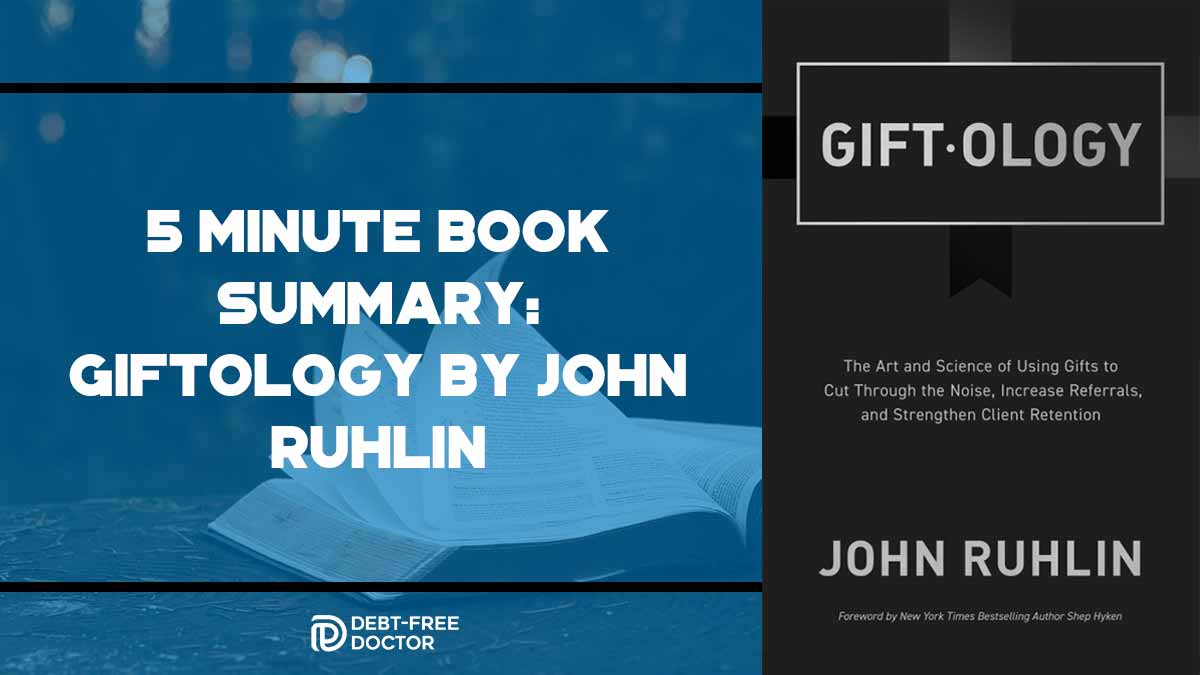 Giftology? Is that a course I missed in college? 🙂

It’s funny when I look back over the 20+ years of education that allowed me to practice as a periodontist, some of the courses that really “stuck with me” had nothing to do with teeth.

During my residency at LSU, gift giving was never on my radar while extracting and replacing teeth. Most residents are focused only on one thing….the finish line!

But once I started a practice from scratch, I realized that I knew NOTHING about how to make it successful. Yes, I was familiar regarding treating patients with the latest and greatest techniques, but that doesn’t automatically equal success.

I quickly learned that there are 3 keys that must be mastered that can bring any business or career success:

I frequently tell my two teenagers that if they master these three areas, then success will follow them wherever they go.

How can giving gifts bring you success?

John Ruhlin had a humble start in life. He was raised on a farm in Ohio and quickly realized that this lifestyle wasn’t for him. So instead, he focused on education.

During high school he made the decision to attend college and eventually go into medicine or law. While in college, his friend was one of the top Cutco knife reps in the country. What really intrigued him was that his friend was a 6’7″ shy, reserved kid that couldn’t sell someone a glass of water in the desert!

This gave Ruhlin hope of doing well if he was hired in order to make some extra dough while in college.

After only a few years with the Cutco company, he became the top seller of all time.

Not bad for a country farm boy.

This massive success completely changed his career direction in life.

And like most successful people, he had a conversation with a mentor that led him to eventually become the founder of The Ruhlin Group.

At the time of Ruhlin’s new Cutco career, he was dating a girl whose father was an attorney that gave him the “secret to success.” Her father, Paul Miller, was a small town country attorney that seemed to get access to all of the deals in the town.

Proverbs 18:16 – “A gift opens the way and ushers the giver into the presence of the great.”

For instance, one time he bought a piece of property with a group and the next thing you know, a large bank moved in and purchased it.

John couldn’t understand why literally everything that Paul touched turned to GOLD.

So Paul was someone that John first approached when he began his sales career at Cutco. He pitched him the idea of giving his employees pocket knives for Christmas when he told John “I don’t want to order pocket knives, I want to order paring knives.”

Ruhlin couldn’t understand why Paul wanted to give his clients, mostly male CEOs, something for the kitchen.

Then Paul went on to give his the secret to success. He told him, “In 40 years in business, the reason I have more referrals, access, deal flow, engagement, loyalty, you name it, is I found out one simple truth… if you take care of the family in your business relationships, everything else seems to take care of itself.”

That statement changed Ruhlin’s life. He quickly realized that it was NOT about the knife. The knife was a delivery vehicle for communicating value and making someone feel special and important. The key was to make the family happy and THEN you make the client happy.

To Ruhlin, Paul Miller was a genius as it was the concept that became the foundation of The Ruhlin Group.

Ruhlin teaches that Giftology is all about relationship building. He feels that we’re all one relationship away from changing our business forever.

In the book, Ruhlin highlights his meeting Cameron Herold (former COO of 1-800-Got-Junk). He claims that this was one of his business-changing relationships.

Ruhlin heard Herold speak at a conference and knew that he could help him take his newly formed business to the next level. What did he do?

He set his sights on winning Cameron as a client through gifting.

Ruhlin invited him to dinner and a ballgame the next time he was in Cleveland to speak and had previously found out that Brooks Brothers was his favorite store.

He used this information to inspire him.

The night they were supposed to meet, Cameron’s flight was delayed causing him to miss the ballgame and dinner.

Ruhlin had a plan.

He went to Brooks Brothers and spent $7,000 to get one of everything from the new clothing line in Cameron’s size.

He had it all transferred to Cameron’s hotel room and set up like a mini–Brooks Brothers showroom (Cleveland Ritz-Carlton).

Cameron arrived from his delayed flight later than expected. John was in the hotel bar to meet him before he went up to his room.

A few minutes later, he came back to down to meet Ruhlin and said, “Whatever you want to talk about for as long as you want, I’m all ears. No one has ever treated me like you did here.”

Twenty years later, they continue to do business together, and John still sends him gifts.

When you give someone a gift, more than likely you think it’s about “the gift” right?

It’s about nurturing the relationships you’re trying to grow such as:

By giving a gift, you are:

What am I supposed to gift someone?

Ruhlin’s golden rule for selecting a gift is that it should be:

If you approach giving without expecting anything in return, you’re much more likely to get an ROI or Return on Relationship.

What Not To Give

Ruhlin feels very strongly that giving a gift card is the ultimate no-no.

Why? Think about it.

How much thought goes into getting someone a gift card?

“Nothing says, “I didn’t care about you enough to put thought and effort into getting you an actual gift” quite like a gift card.” – John Ruhlin

Research shows that people want to feel genuinely appreciated and acknowledged by their company and those around them.

And giving someone a gift card isn’t the answer.

I have to tell you that this one made me rethink my current gifting strategy. Ruhlin states that if you’re claiming that your product or service is best in class, then your gifts should be too.

It’s understandable why companies (mine included) tend to gift consumables around the holidays such as:

It’s quick and easy and something else…people have come to EXPECT it which is exactly what you don’t want.

Plus, there are too many variables that count against you such as:

Giftology states that the gift should be all about the recipient, not about the brand and giver. But what do we normally do when we give someone a gift where we want their business? We slap OUR logo on it, right?

By doing this, you turn the gift into your own promotional item.

Plus, you manage to devalue both the gift AND your brand. This makes a lose-lose situation.

The key is to personalize gifts but using their name, company or something that is unique to them.

Personalization turns an ordinary gift into an extraordinary one. Let’s face it, when you make a gift all about you, it’s not a gift.

One of the greatest mistakes of gifting is when the gifts reflect the sender’s preferences instead of the recipient.

Gifts are meant to be about the recipient.

How many times have you been given something with a company’s logo on it? “Hey Jeff, here’s a hat or shirt with our logo, where it for us will ya?”

Ruhlin points out that you’d never go to someone’s wedding and give them a vase from Tiffany and Co. engraved with your name on it, right? So why would you give a corporate gift with your company name on it?

Gifts are meant to be all about the recipient, from the timing to the personalization to the gift itself. When it’s all about you and your company, it shows a lack of genuine appreciation for the recipient.

Take the time to learn more about your recipients by discovering their likes and dislikes, and choose something that is thoughtful and meaningful to them. This is probably the most sincere way to send a gift.

Here are a few of John’s top tips for gifting:

This is when you plan to send a gift ahead of time, but your recipient has no idea about it. Ruhlin claims this works best due to the psychology behind this principle.

He states that when someone is expecting a gift, it is “no longer a surprise but an obligation”.

For example, if someone told you that they were going to get you a gift, you might:

Either way, you’re likely to be disappointed to find out that it wasn’t what you expected.

#3. The best gifts delight more than just the recipients themselves

How many times have you struggled with gift ideas because you don’t know what the recipient likes?

Ruhlin recommended a new way to think about this situation. He says that instead of focusing on the gift itself, why not focus on the experience that comes with using the gift.

You’re trying to create moments where your recipient can appreciate the gift with their respective circles.

An example is one that he talks about frequently in the book regarding gifting of knives. Several times he  mentioned his “go to gift” being a set of high-quality kitchen knives with the name of the recipient engraved onto it.

Think about that gift. Not only will they look amazing but the recipient will use it frequently when preparing their meals.

Ruhlin calls these types of gifts “practical luxuries” which reminds the recipient of the gift giver almost every day.

If that doesn’t leave a great impression, then I don’t know what does.