It’s funny how our paths cross in life. During a break at a recent FinCon meeting (conference for financial bloggers and professionals), I happened to turn to the guy sitting behind me. It seemed that there had been a schedule change that I was unaware of. Little did I know that this “guy” happened to be someone that also had a doctor-finance blog by the name of Dr. Cory Fawcett. After small talk, he graciously gave me several of his books including, The Doctor’s Guide To Eliminating Debt. Why Do I Need A Book On Debt Reduction?

My initial thoughts were, “Why would I need a book on getting out of debt as I’m already debt free?” My wife has always said that I should practice being more open minded…so I did!

Honestly, I enjoyed not only learning about Dr. Cory’s philosophy on debt reduction, but also his personal story which is WHY he chose to do what he teaches docs now. Typically, I tend to connect more to people once I learn about their past and why they do what they do. 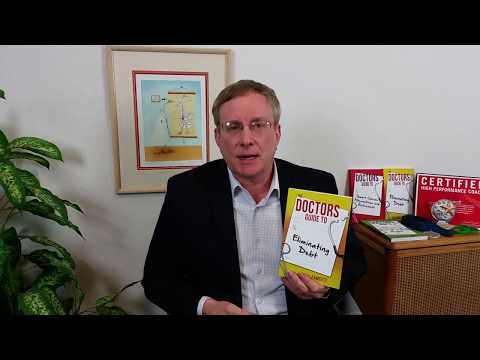 Have Money, Will Spend

Unlike The DFD, Dr. Cory only had $18,000 in student loans after graduation. Once the money started flowing in from the practice, his consumer debt began to rise.

Keeping up with the Joneses meant purchasing:

His wife, Carolyn, started getting concerned with the amount of debt that was racking up and suggested he read, Debt-Free and Prosperous Living by John Cummuta.

Dr. Cory couldn’t believe, after reading the book, that nearly everyone could get out of debt withing 5-7 years – including the mortgage.

After entering his numbers in a spreadsheet using the debt snowball plan, his calculations confirmed that he could be debt-free in just 3.5 years.

The Fawcett’s were used to living on a budget. They realized that they could use the extra $3900 left over each month to attack their debts from smallest to largest.

He feels that too many people are fixated on interest rates regarding which loans to pay off first. The remaining student loan balance was paid off in only one month which was a huge psychological boost to getting the snowball started.

Dr. Cory states, “Since most people’s debt is usually proportional to their income, almost everyone is about 6 years from being debt-free.”

It seems anyone can find an excuse to avoid paying down debt ahead of schedule. Doctors think they have too much debt to pay it off quickly (even though their income is typically higher), whereas the average Joe can because he has less debt.

Those with low income and low debt often say that their income is too small to pay off debts early, but it would work for doctors because they have a higher income.

It seems that anyone can find an excuse.

Most don’t realize the impact of NOT having a mortgage when entering retirement.

Here’s some of Dr. Cory’s numbers:

After paying off the house within 6 years, Dr. Cory realized that if he were to invest the original monthly payment into a retirement plan for the remaining 24 years of the original mortgage, assuming an 8% average return, they would have a balance of $2,658,001!

Making withdrawals at 4% a year would give them a gross income of $106,320/year, from the money that would have been paid in mortgage payments.

Here’s the deal: Investing the house payments and having compound interest work in their favor would:

A Different Way to Look At It

Here’s a different way to look at holding on to your precious mortgage at retirement.

I don’t know about you, but I’d rather pay off the house….

Here are a handful of advantages Dr. Cory states you have when you’re debt-free:

Symptoms and Causes of Debt

For most doctors, debt has become the norm – everybody else is doing it, right? If you want a new car, boat, or SUV, loans are readily available to help you get want you want NOW. Unfortunately, most of us have become “numb” to debt.

Once you shift into the “Debt-Free” mode, you look at things a bit differently.

For many of us, it all starts with student loans. We borrow money knowing in the back of our mind that it will be repaid someday.  Heck we’re going to be a doctor!

Once the big bucks start rolling in, it gets easier and easier to add more debt. We have plenty of money, right?

When the real estate agent “thinks” we should look at a larger house or the car salesman wants to put us in the “doctor” car, no problem-o.

Sometimes we think to ourselves, “What will it matter if I borrow a little bit more?”

If you know someone that’s battled an addiction, ask them these questions:

Only after docs begin to face the consequences of piling on debt, they begin to realize the monster they’ve created. “Too many people spend money they don’t have, to buy things they don’t need, to impress people they don’t like.” – Will Rogers

Make Hay While The Sun Shines

Dr. Cory teaches us a valuable lesson (make hay while the sun shines) that reminds me of when I used to play blackjack. During a one year stent in Biloxi, Mississippi, I spent time at the VA hospital completing a general practice residency. A colleague (Dr. Phil) and I would occasionally kill time golfing and playing blackjack at the Beau Rivage casino.

On one particular occasion, I got on a roll. Looking back, I can see how people can become addicted to gambling. Man what an adrenaline rush!

Anyway, while on my streak, I noticed that my pile of chips stayed about the same level. Little did I know, Dr. Phil was secretly stashing away our extra winnings in his pocket.

He didn’t want me to spend anymore that I had originally put in and also wanted us to come out ahead too.

The moral of the story is this:

When times are good, resist the temptation to spend and borrow. Good times are the best to be saving and getting ready to weather future storms.

Fill the loft with hay, so you can feed the cows in the winter when the grass is snow-covered.

Then when the bad times hit- and they will- you’ll be ready to weather the storm.

In my case, the future storm would have been when the cards turned south and I got on a losing streak.

Who Should Read This Book?

This book is a quick read that any health care professional student or young doctor could certainly benefit from reading.

We, as doctors, don’t have an income problem. We usually suffer from an expense problem and are not willing to face it.

This book helps us to face our debts head on and put together a plan to do something about it.

A few parting words from the good Dr. Fawcett: