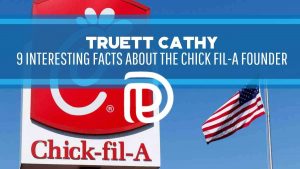 Which fast food restaurant is known for their top-notch customer service? If you guessed Chick fil-A, you’d be correct (IMHO). Samuel Truett Cathy, founder of Chick fil-A, was one of the world’s wealthiest people at that time of his death in 2014 (age 93) but his story is what makes him so great.

“We change the world, and ourselves, by our response to unexpected opportunities.” Truett Cathy

Before we get into the 9 interesting facts about the Chick fil-A founder, let’s find out how the restaurant started…

In 1946 after Cathy’s discharge from the United States Army during World War II, both Mr. Cathy and his brother Ben Cathy opened the Dwarf Grill in Hapeville, Georgia, a suburb of Atlanta. The grill was originally built next to a Ford auto plant. Their thinking was that there was going to be a lot of hungry workers during lunch and they were right.

More importantly from the grill came the idea for the Chick-fil-A concept. The brothers noticed that many of the customers were making fried chicken sandwiches from the rolls and the chicken meat that they served. I guess you never know where the next greatest idea is going to come from.

In 1967, the Chick-fil-A chain was started in the Greenbriar Mall in southwestern Atlanta.

Have you ever noticed that most Chick fil-A restaurants are located in shopping malls? The main reason is that in the early 60’s, Cathy noted that the main growth of America’s suburbs were springing up on the outskirts of cities. Thus, he wanted to go where the growth was happening in shopping centers.

Chick-fil-A has now grown to nearly 1,500 restaurants in 39 states.

Here’s some interesting facts that we can take from his 93 years on Earth.

I was pleasantly surprised to see that both Truett Cathy and I were both inspired by Napoleon Hill’s book, “Think and Grow Rich.”

Serving comes natural to Mr. Cathy’s family. When he was young, in order to increase their income, his parents allowed boarders in their home (even though they were a family of nine).

During that time, Cathy learned the value of hard work as he helped his family serve those staying in their home. Now you know why Chick-fil-A strives so hard for giving out top notch customer service. He was raised to serve.

If you’ve ever said, “Thank you” in one of their restaurants, then you’ll likely get a “My pleasure” reply from one of their smiling employees.

#3 Cathy descendants are not entitled.

I went fishing last month with a friend whose family was the first to bottle Coca-cola. When asked about his kids, he informed me that one of his sons, who wants to join the family business, must work for five years outside the company before returning.

It seems that Chick-fil-A has a similar policy except Cathy descendants must work for two years outside of the family business before they can join Chick-fil-A.

Why? The descendants are taught that just because they are part of the Cathy family, doesn’t mean that they are entitled to automatically have a job with Chick-fil-A. Impressive.

They want them to experience what every other college graduate experiences: finding a job on their own.

#4 Start by managing your own household – family first.

Truett Cathy died in 2014 at the age of 93. His wife, Jeannette passed away the following year at 92. They were married for over 60 years. One of their secrets to marital success was that they were always improving their marriage and never gave up on their relationship. This was something that he frequently taught young couples. #5 NEVER give up. Perseverance is the key.

After experiencing success with his first restaurant, Mr. Cathy took a huge risk and opened a second location which burned down. Did he quit? No. He persevered and grilled under tents that he put up in the parking lot next door until he was able to pay for repairs.

When you look at great leaders, whether they are leading a football team or a Fortune 500 company, the one quality that most have in common is perseverance.

Remember, when the going gets tough, the tough gets going.

How many people that become net worth billionaires would continue to teach Sunday school classes? Truett Cathy not only did but also continued teaching for over 50 years.

Cathy tells a story of once while teaching, he asked his class, “How many of you would like to have one million dollars?” As you can imagine, everyone raised their hands.

Then he explained, “Let me tell you something better than that—to protect your reputation, to establish a good name and to be consistent about it.”

One curious boy asked, “Suppose you already have a good reputation?”

One of the early Bible verses he memorized for school taught him this lesson:

Proverbs 22:1 “A good name is rather to be chosen than great riches.”

Bottom line: What we say is important, but what we do is more important.

One of his books, “It’s Better To Build Boys Than Mend Men”, summed up his attitude toward helping young boys in trouble.

#7 Had a vision and it starts with “WHY”

Chick-fil-A’s purpose statement reads, “To glorify God by being a faithful steward of all that is entrusted to us and to have a positive influence on all who come into contact with Chick-fil-A.”

Truett Cathy was a man who truly lived his faith by:

For him, chicken was simply a tool to accomplish his real purpose: honoring God and helping people.

As we learn from Simon Sinek’s book, Start With Why, most successful companies understand what they do best, WHY they do it and then focus on doing it.

If you’re a die hard Chick-fil-A fan like we are, then you know that it’s closed on Sundays. 🙁 That decision was made by Cathy over 50 years ago and one that he felt was the BEST business decision he ever made.

The reason was easy: He didn’t want to miss going to church with his family or teaching Sunday school classes.

Chick-fil-A’s “closed on Sunday policy” has been a great advantage in attracting the caliber of people whom they like to attract. It lets their customers know what their priorities stand for and that they stick to their convictions.

When his critics said, “Look how much money you lose by being closed on Sunday,” he answered, “You’re wrong, because we generate more sales in six days than our competition does in seven.”

Just because Truett Cathy was a religious man, it never stopped him from showing his humorous side. Chick-fil-A’s commercials have always been funny and one of the key marketing pieces that have allowed them to stand out among their competition.

Most of their commercials involve cows holding up signs that say, “EAT MOR CHIKIN,” instead of, “Eat More Chicken,” suggesting that cows might have trouble with spelling.

It was an effort to get people away from burger chains, and it seems to have worked.

Truett Cathy was a great and honorable man that will be missed by many.

Another great review on a remarkable person. Learned stuff that I didn’t know so thanks ?

Thanks for reading friend. Mr. Cathy was an amazing man.

I thoroughly enjoyed researching his life.

Great book – Start w WHy, one of my favorites. I love the Chik Fil A story, I am part of the Chik Fil A leadership academy at school. Pretty cool stuff.

Josh, it’s always educational whenever I research interesting people such as the great Truett Cathy.

I love what he stood for and the values he’s passed down to the company to continue to operate by.