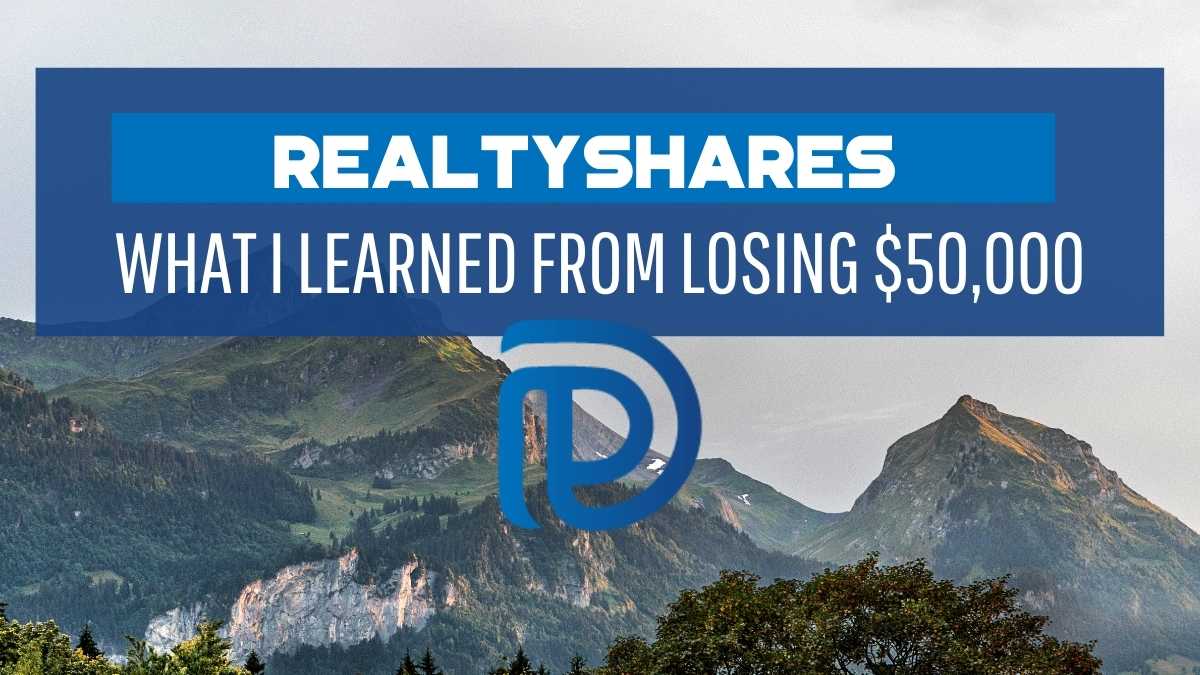 Yes, it was painful writing the title of this article as I realize that most people don’t like admitting their failures.

Now that I’ve been passively investing in real estate for several years, I can now reflect back at the many things I did wrong with investing, especially with RealtyShares, and losing $50,000 (more on that shortly).

During the process, I realized I broke one of my main investing rules:

“NEVER invest money in something you don’t understand.”

Boy did I break that rule.

Here’s the rest of the story….

RealtyShares (was) a real estate investment platform that gave new and existing investors direct access to investment opportunities and real estate operators the ability to offer new investments and raise capital. At the time I invested with them, they has approximately 400 million assets under management.

They sought out, like many other crowdfunding platforms, to develop relationships with real estate sponsors to bring them qualified investors to their deals.

Another thing that RealtyShares focused on was the customer service and value they provided their investors on the RealtyShares platform.

Here’s how I got started…

After my wife and I got out from under mounds of student loan debt, I decided that I needed to make a change.

Up until that point, I’d always had goals I was trying to accomplish. For instance, when I was in college, my goal was to get into dental school.

In dental school, my goal was to graduate in the top of my class in order to get accepted into a residency.

Shortly before completing residency, I had a job offer pulled out from under me two weeks before graduation. At that time, I went into survival mode.

My only focus and goal was to learn all I could about starting and running a practice.

Heck, I learned so much I wrote a book about it: What They Don’t Teach You In Dental School

After starting a practice from scratch, I focused on paying off $250,000 of student loan debt and a house that we were paying interest only on.

Once we reached debt-free status, I felt great but unfortunately was a bit confused not really knowing where to go to next.

As a matter of fact, Dave Ramsey has now had to modify his “get out of debt” teaching that also addresses this same issue.

He’s now shifted to teaching his debt-free followers to shoot for becoming a millionaire.

He actually partnered with Chris Hogan and wrote “Everyday Millionaires” which is the largest study of millionaires since the book “The Millionaire Next Door” was written.

It was at this point in my career that I realized I had only “one” stream of income coming into our household which concerned me as I’m still an active guy.

I love sports but have also been injured multiple times playing basketball and tennis.

Yes, I occasionally “ball” with my kids. I’m not that old yet!

I do have the appropriate insurance policies to cover me if I injure my hand or arm but still wanted to do something about that one income stream.

So I decided to look into real estate investing.

Not only did I want to begin replacing my “earned” income with passive income, I also wanted to free myself so I could continue spending more time with my kids as they’ll be out of the house in the not too distant future.

At the time I started researching real estate investing options, our personal finance portfolio looked like this:

I thought about starting off buying a couple of single family homes but after talking to friends that invested in real estate full time, I decided to go a different route.

It seemed that they constantly were having to take calls from either tenants that were having problems or their management companies when structural damage needed attending to.

As someone that still practices full time and wants to stay a devoted father and husband, I decided to bypass the active real estate investing route and chose to invest passively via crowdfunding.

One of the sites I began investing with was Realty Shares.

I initially invested in a hand full of small debt deals to get my feet wet especially since most of these had low minimum investments. In these types of investments, the investor is acting as a lender to the property owner or the deal sponsor.

The loan is secured by the property itself and investors receive a fixed rate of return that’s determined by the interest rate on the loan and how much they have invested.

In a debt deal, the investor is at the bottom of the capital stack which means they have priority when it comes to claiming a payout from the property.

These deals were easy to understand but one of the main downsides is the fact that returns are limited by the interest rate on the loan. In other words, their returns are capped.

As I became more comfortable investing with RealtyShares, I decided to step it up and began researching preferred equity investments.

With these investments, the investor is a shareholder in a specific property, and their stake is proportionate to the amount they have invested.

Returns are realized in the form of a share of the rental income the property generates, less any service fees paid to the crowdfunding platform.

Investors may also be paid out a share of any appreciation value if the property is sold.

What really attracted me to these deals was being able to capitalize on the profit once the property was sold.

In essence there were no cap on returns plus the tax benefits were outstanding.

One perk of owning an investment property is being able to deduct certain expenses associated with its ownership, such as depreciation and the cost of repairs.

With equity crowdfunding, deals are normally structured through an LLC, which is treated as a flow-through entity for tax purposes. That means that investors can reap the benefits of the depreciation deduction without having to own property directly.

I decided on investing in an apartment complex in Tulsa, OK. The complex was called Prescott Woods and the projected cash on cash return was 6-8% and targeted internal rate of return (IRR) was projected to be 17.9% – 19.9%.

Honestly, I didn’t know what I was doing back then when I originally invested in this project. My eyes immediately would look to see if they were accepting new investors and what the returns were.

RealtyShares claimed that they were approached with hundreds of deals per year and ONLY would put the cream of the crop on their site. Other sites such as Realty Mogul and others state the same thing.

I was putting my total trust in them to do the leg work for me.

For this particular investment, the minimum was $50,000 and was for accredited investors only.

Again, investing in this property was my BIG mistake due to lack of due diligence on my part with the sponsor.

Here’s the update RealtyShares sent me on 8/19/19 after IIRR Management Services,LLC (IRM) took over their site:

According to our findings, this asset has been identified as a Tier 3 asset. All possible distributions, interest payments and proceeds from this investment have now been collected and paid in accordance with the investors’ rights per the loan documents.

IRM has classified this investment as Failed. This is because the sponsor underestimated how challenging it would be to turn around an apartment complex at the edge of a rough neighborhood in Tulsa.

The crime and resulting stigma of the neighborhood put a cap on the rents that tenants would pay and the resulting renovation to the subject apartments did not allow the sponsor to charge a premium for renovated apartments.

Compounding this error, the sponsor’s fast-paced construction schedule meant that the renovation dollars were spent before the sponsor recognized that higher rents for renovated units were not achievable. They were also unable to secure additional capital.

The commercial property sold for $8.3MM, which resulted in a total loss for investors. There is no further remedy available to IRM to pursue such as a guarantee other security.

After I originally received this notification, I got a sick feeling in my stomach. This entire ordeal had been going on for over two years and I finally was hit with reality….my entire investment was gone.

What Would Rocky Do?

Whenever I face failures and tough times, my mind always goes back to a scene in Rocky.

I reminisce the part where he’s talking to his son about facing adversity.

“Let me tell you something you already know. The world ain’t all sunshine and rainbows. It’s a very mean and nasty place, and I don’t care how tough you are, it will beat you to your knees and keep you there permanently if you let it. You, me, or nobody is gonna hit as hard as life.

That’s how winning is done! Now if you know what you’re worth, then go out and get what you’re worth, but you gotta be willing to take the hits, and not pointing fingers saying you ain’t where you wanna be because of him, or her, or anybody. Cowards do that and that ain’t you. You’re better than that!”

I realize it would have been easy to quit the real estate investing thing after such a large loss but I don’t think that things happen to us, they happen for us.

The experience actually inspired me to both learn more about these types of deals, specifically multifamily syndications, and also help educate others on what you should know before investing in these investments.

I encourage folks to do their part and learn as much as they can before considering investing.

One other thing I highly recommend is to join the Passive Investors Circle.