5 Reasons Why Doctors Aren’t A Prodigious Accumulator Of Wealth I first heard the term, “prodigious accumulator of wealth” in 1996 while reading Dr. Thomas Stanley’s book The Millionaire Next Door.

If you haven’t read it then head over to Amazon and get it now.

Even though some of the statistics might be outdated, the basic wealth building principles collected while surveying thousands of millionaires are still relevant today.

I’ve always enjoyed reading about how millionaires have obtained their wealth in books such as:

When The Millionaire Next Door was published in the late ’90’s, the authors stated that being “rich” was having at least a million dollar net worth.

Fast forward to today and research claims that you need $2.3 million to be considered “rich.”

What about you? Do you consider yourself “rich”?

7 Characteristics of a Millionaire Next Door

The book’s authors discovered that out of the thousands of millionaires surveyed, the same seven characteristics to wealth building kept popping up.

#1 They live well below their means.
#2 They allocate their time, energy, and money efficiently in ways conducive to building wealth.
#3 They believe that financial independence (FI) is more important than displaying high social status.
#4 Their parents did not provide economic outpatient care.
#5 Their adult children are economically self-sufficient.
#6 They are proficient in targeting market opportunities.
#7 They chose the right occupation.

Let’s focus on the first three for our discussion today.

In The Millionaire Next Door, the authors stated that if someone has the correct mindset about money then they could become a prodigious accumulator of wealth (PAW).

This is a personal finance formula to determine the efficiency of wealth accumulation. Let’s take a closer look at what goes into the makings of a PAW.

“How do you become wealthy? It’s seldom luck or inheritance or education or even intelligence that builds fortunes. Wealth is more often the result of hard work, perseverance, and, most of all, self-discipline.”

What’s a Prodigious Accumulator Of Wealth?

In order to figure out if you’re a PAW or not, we must first use the author’s formula to determine net worth. During their time surveying people while writing the book, the authors created a simple rule of thumb to determine their wealth:

Multiply your age times pretax annual household income. Divide this number by 10. This is what your net worth should be.

Once you obtain your expected net worth (ENW), then you’re ready to move on to the next part of the calculation. PAWs typically have a minimum of 4x the wealth accumulated by UAWs.

Revisiting our example above, Dr. B’s net worth/wealth should be approximately twice the expected value or more for his income/age cohort, or:

If his level of wealth is one-half or less than expected for all those in his income/age category then he would be classified as a UAW.

There’s been much criticism about this formula especially regarding doctors and other professionals that start out later in their careers with high amounts of debt.

Maybe someone could develop a doctor-specific formula that could factor in:

Here’s a formula the White Coat Investor came up with over 10 years ago:

If we were to use his formula: Most physicians and dentists earn more than four times the income of the average American household.

But not surprisingly, The Millionaire Next Door found that doctors typically aren’t very good at accumulating wealth.

Their research showed that for every one doctor in the PAW group, there were two in the UAW category.

I’d be willing to guess that it’s higher now over 20 years later.

Why do they lag so far behind on the wealth scale?

Here’s what I think….

5 Reasons Why Most Doctors Aren’t a PAW 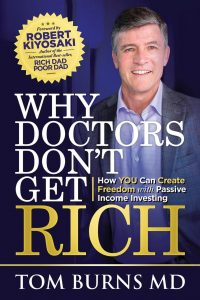 Typically when I speak with new Passive Investors Circle members that have zero savings, most:

Here are the top 5 reasons why I feel that most doctors don’t become a prodigious accumulator of wealth:

#1 They start off in a hole later in life

Both medical and dental school costs are on the rise. Couple that with the amount of time it takes to obtain a degree and most docs start off in a LARGE financial hole later in life.

If they’re not focused and diligent enough to tackle their debt while living below their means, then they’ll never get ahead financially. Many doctors feel that their high income means their rich.

Often, they fall prey to Parkinson’s Law which states that “expenses will rise to meet income.”

This is what eventually goes on to form the “golden handcuffs” giving them a false sense of wealth and security early in their career.

This plus focusing on their social status by trying to “keep up with the Joneses” with expensive homes and cars eventually makes them feel trapped.

#3 No time for what “really” matters

I recently spoke with a physician that has been practicing for 14 years. He didn’t know how much money he had saved for emergencies or what his financial planner was investing his money in.

He told me he was “too busy” treating patients to ever think about it.

I guarantee you that if you’re “too busy” to focus on your money, then it could result in bad financial news down the road.

Dr. Stanley found that those that dedicate at least one hour each month to family finances had a much better chance of reaching PAW status.

#4 Think they can handle everything themselves

I get that becoming a doctor takes time, self-sacrifice and dedication. We get so used to the long hours of studying that we focus less on relying on others for anything.

“Plans fail for lack of counsel, but with many advisers they succeed.” – Proverbs 15:22

Unfortunately this can carry over into our financial life once the big checks start rolling in. Surrounding yourself with trusted advisers is one of the keys to wealth accumulation.

It’s also important to surround yourself with positive people who move you in the direction you want to go, and it’s equally important to AVOID negative people.

#5 Put too much hope in selling their practice

There’s two things that I don’t factor into my financial future:

Too many doctors treat the potential sell of their practice like “winning the lottery” but many times a buyer can’t be found.

If you’re able to then great, but don’t count on it. Instead treat it as “lagniappe” and focus on developing the seven characteristics of a millionaire.

Ready To Become a PAW?

A real shake to our ego!!
Every doctor should read it and reassess his financial planning.

Doctors in general take on too much debt to maintain a perceived lifestyle. This in turn bites them when it comes to negotiating with insurers or employers. Thus they are unable to turn down terrible contracts for they cannot forego this substandard compensation. Just look at the yearly decreases in medicare payments. A smart businessman knows when to walk away from a bad deal.

“Plans fail for lack of counsel, but with many advisers they succeed.”
Unfortunately this can carry over into our financial life once the big checks start rolling in. Surrounding yourself with trusted advisers is one of the keys to wealth accumulation.

“Trusted Advisers” are very rare to find. If they do, to the tune of ‘only 1% annual management or advisory fee’s,’ they are not worth it in the long run. In my experience, well over 99% of advisers are not worth the expense and are detrimental to one’s financial well being. I know, I paid for what I believed were the best in their field for DECADES!

Educate yourself, but beware, over 99% of books, magazine articles and internet websites as well as financial shows on the radio and TV are nothing more than hopeless financial pornography – they’re exciting and full of false promises – yet provide nothing more than false hopes and expectations. They are generally nothing but noise and distraction.

I would go to your local library and check out (FOR FREE) a book by John Bogle or Rick Ferri and take the requisite time to read it and understand it, then build from there. Yes, it will take time – but how much is it worth to you?

NOBODY has more of a vested interest in your money than YOU!

Another flaw with Dr. Stanley’s formula-reliance on annual income to calculate PAW.

For example, my sixty year old twin brother( an electrical engineer) earns $200,000 per annum. His PAW value calculates to $2.4 million.

I read Dr. Stanley’s book when it was first released and gave copies to my children.

Early in my career I started using a wealth management team at a good, reputable bank. I did a detailed analysis of these services some large banks provide. My goal was wealth preservation not wealth generation per se. I wanted a very conservative portfolio.
That was close to 40 years ago. I avoided all the downturns because I had a conservative portfolio focused on preservation of the wealth I accumulated from working as a physician.
I came from a blue collar family so I understood what money can do when I started earning a large salary. I enjoyed this wealth but conservatively. I’m not a penny pincher but clearly understand it needs to be shared and enjoyed to a limit.
I retired last year and meet the criteria for PAW. I don’t hesitate to spend money on my family on things that make them happy and improve their lives while not doing the “keep up with the Jones” mentality.
I am quite surprised this happened to me as I never expected or wanted to be rich as a goal and had no skill base in finance. But it happened because I let others who earned my trust manage my wealth and not me.

Principles of accumulating wealth are not difficult to understand, though difficult to practice. Like for every worthy thing in life, what is needed is discipline and focus on the goal. We spend years to train so that finally we can practice and earn, but don’t spend even few hours to understand how to handle money. It’s not a rocket science: i. spend less than you earn ii. develop multiple sources of income iii. try to replace your active income with passive income. iv. know how much you need to be financially independent and work towards your goal.

You hit it spot on….we need DISCIPLINE to focus on our goals.

Too many of us don’t.

You’re also right in that it’s NOT hard to do especially with our high income vs the average American.

The books, The Richest Man in Babylon and the Cashflow Quadrant completely changed the way I think about HOW I make money and not so much how TO make money.

This the right answer to the wrong question. Accumulating wealth is a means to an end, not an end in itself. Money cannot buy happiness, but intelligent allocation of resources—time, human and financial capital, personal and family relationships—can lead to freedom to lead a fulfilled life. The five reasons listed also reasons why doctors have high indicies of social pathology,

Not every prudent investor physician will become wealthy, but every one should be able to achieve financial security for themselves and their families. The wealth required for this achievement is a combination of investment in human capital (think additional postgraduate fellowships and certifications), accumulating income security for retirement through financial instruments or retirement credits in a corporate employment situation, intelligent insurance to anticipate potential disasters, and maintenance of physical and mental health through work-life balance.

When it comes to finance M.D. stands for mental deficiency.
Don’t confuse saving and stock piling with investing.
Don’t get robbed by your bank,
and remember,
you can’t take it with you.