A long time ago in a galaxy far, far away. Sorry. You caught me reminiscing when I used to be a lowly dental student. Back then I didn’t give much thought about how to live frugally and pay off debt. Heck, I was going to be a dentist, make tons of money and live happily ever after. Unfortunately, things don’t always work out as planned.

I agree that as a student, it’s easy to live in the present piling up debt and not think about the future. In the back of my mind, I had the picture of being a rich dentist.  Deep down I knew that everything was going to work out.

If I could go back in time, things would have been done MUCH differently during dental school and my residency. I can promise that what you do early on will make it much easier moving forward in life.

Today, I’m going to briefly walk you through my journey of dealing with debt + share with you tips that six top finance bloggers have used to live frugally and pay off debt.

What do you want to be when you grow up?

Early on, I was attracted to becoming a healthcare professional due to an unfortunate accident leaving me with second degree burns.

Do you remember being taught not to play with matches?

I did too…but obviously didn’t listen. When I was 7 (the day before my 8th birthday), my mischievous friend and I decided to start a fire in a neighbor’s backyard. One thing led to another, gasoline was used and poof, my life was changed forever.

Shortly thereafter, I was placed under the excellent care of a local plastic surgeon, Dr. Gene Worthen. He made a bad situation comfortable, especially for a second grader.

Growing up, a handful of my friend’s dads were physicians and others were dentists. I noticed that the dentist dads ALWAYS made the baseball and football games (some even coached) while the physician dads were either absent or routinely late to the party.

My uncle Chuck, recently retired dentist, was also influential with my future career choice. In 1996 the big decision was made and I headed off to LSU dental school graduating in 2000.

Til’ debt do us part I admit… I was stupid. I didn’t give much thought to living frugally or pay off the accumulating debt during training because ALL dentists are rich…or so I thought.

Even better, I decided to delay a paycheck and go deeper into training as a specialist (and debt). As if four years post-college wasn’t enough, I added another four to the list.

Looking on the bright side, I was able to meet and eventually marry Mrs. Debt Free 🙂 during training. So I guess all of the education paid off after all!

Not Meant To Be

From the time I started school, visions of practicing in my hometown started. Luckily there was one specialty group already established which made it even easier to make my decision.

We talked back and forth throughout my residency. I kept in touch to mainly tell them how close I was to graduating and then the unfortunate happened. Our deal fell apart less than 2 weeks before graduating leaving Mrs. Debt Free and I with a 2 month old and over $250K in student loans. 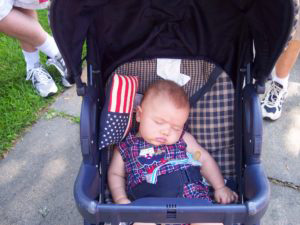 To top it off, as if things couldn’t get worse, I had NO clue how to start a practice. Fun stuff.

About a month before this happened, my wife and I found a great “starter” house in the neighborhood that I grew up in. I can’t tell you how EXCITED we were to FINALLY move into a house after renting for the previous eight years.

In our old apartment, I could stand in the hall and place an arm in the guest bedroom, an arm in the master bedroom, a leg in the bathroom and other leg in the den. As you can imagine, going from 800 sq/ft to 2,500 sq/ft felt like winning the lottery.

(Mistake #1 – Purchasing a home without being able to put down 20% and taking out an interest-only loan. UGH.) Now that the job offer had fallen through, not only did we have over $250K in student loan debt, but we also added an “interest only” mortgage which increased our total debt to over $450K. (We bought the home two months prior to graduation counting on a job!)

(Mistake #2 – Taking a personal loan from a family member.)

In the beginning of our journey, it was so tight to make ends meet, that I had to borrow money from my grandmother. This was money that had already been earmarked to give to her son (my dad) after she passed.

I HATED having to take it. Bills were becoming due and I also started  mowing yards on the side. (Yes, you read that correctly. I returned to several of my previous clients from my lawn service high school/college days and asked if I could mow their yards again…at least for another year.) As you can imagine, it was a very humbling experience.

My initial thoughts of what Dave Ramsey calls “Doc-itis” or entitlement syndrome most Docs go through were bashed before I had made my first dime.

Live Frugally and Pay Off Debt

Looking back during my training, I could have been more frugal, I get that. But with having a potentially well paying career ahead to look forward to, who should care about the present while the future looks so bright.

WARNING: If you’re on the path to a potential high-earning career, pay attention now as if your life depends on it. What you do during school/training can potentially make or break you no matter what career decision you make.

Starting out being frugal while limiting your debt is the secret that everybody knows exists…yet too few of us follow.

I’ll be the first to tell you that I would NOT be where I am today if it weren’t for other people. Back in March 2018, I decided to start this blog simply for that reason of “giving back.” My thoughts were that if I could keep just one person from making the mistakes I’ve made, then I would be successful.

In the few short months that I’ve been doing this, many of you have written to tell me that what I’m providing is helping. That’s a win for me.

Recently, I reached out to some of the Top Finance/Investment bloggers over at Rockstar Finance for help. They all know my story and now want to help you decrease your debt load with specific action steps.

Help is on the way

Thomas over at The City for Millennials paid off $80K in student loans in only 3 years. When most talk about investing for the future, rarely does the term “student loan” come up. But it should. Specifically paying them off.

He paid off his debt using some serious hustle. Many think of Millennials as the “entitled” group. Not Thomas. He focused on his debt and made a detailed plan of attack.

Next, he picked a job that required travel allowing him to rent out his room for half the year. He also took advantage of racking up some serious overtime hours and found a secret tax “loop hole” while working overseas.

You can find out exactly how he accomplished all of this HERE.

If you have student loans, Making Momentum’s 7 steps is a must read.

From refinancing to cool apps to use while in repayment, Making Momentum has got you covered.

Mike over at MIKED up Blog as a great story about debt that hits home with me. His wife, Monica, is a dentist too.

Take a peek HERE how they are starting out deeply in debt but fighting their way through it with several different scenarios at play. Do you want to know how to destroy debt but at the same time live a little? Apply The Physician Philosopher’s 10% rule.

I must honestly say, that the 10% rule is one of the BEST out there for not only docs, but anybody that wants to pay down debt and still enjoy life along the way.

The good doctor also gives us his top “Moderately Frugal” tips to live by as we pay down our debts and build massive amounts of wealth.

Here’s a few of the top ones:
-Don’t buy the expensive car or house
-Bring your lunch
-Don’t eat out more than once per week
-Invest pre-tax in your retirement accounts to give you more post tax money to put towards debt
-If you have kids take advantage of dependent care flexible spending accounts and the child tax credit
-Use a flex spending card if you have one for health care expenses (pre-tax money used instead of post-tax). He uses this for buying glasses/contacts each year, taking my family to the dentist, and primary care co-pays.

Pay off the mortgage

My good friend, ESI Money, fills us in on the home buying process the old way – (I wish I would have read his list BEFORE we purchased our first home) versus the ESI way.

You’ll learn how to take control of the home buying process NOT allowing the banks to control you. Buying a home is the MOST expensive purchase most will ever make. Do your due diligence and read his info before it’s too late.

15 months to pay off house

FiveJourneys.com made a strong commitment to pay off the house in a little over a year. Before jumping in, he prepared first for 3 months and provides us with 4 tools to begin saving and pinching pennies.

By making small changes to the way you manage money, you can find a lot of extra money that can be used to pay off debt faster. Use the tips above to catapult your debt payoff plan and begin your journey to financial freedom today. Great story highlighting some of the pitfalls that any trainee in a perceived high income profession faces.

That definitely was tragic having a job opportunity disappear that late in the game and being on the hook for a home, etc. Very impressed that you didn’t let ego get in your way and started doing side hustles like mowing a lawn again, despite just finishing dental school training.

Definitely a cautionary tale everyone needs to be cognizant of.